OK so I’m running a bit behind this week.  Actually, scratch that I’m running a lot behind as this is my first post since last Thursday’s “Things I want” post (now renamed Objects of desire) and given this will be posted on Friday rather than Thursday…. You see my point!  And after last week’s slightly frivolous post, we are coming back down to earth with a shiver.

Winter is approaching fast despite last month’s random Indian summer (very peculiar but I will never understand the vagaries of the British weather) and with the advent of winter, this means the start of the cold and the wet… Remind me why I live in this country again?!

So it’s time to stock up on woolies and bring out the wellies and, in my case at least, start looking for that fashion essential to see me through the dark months.  Yes, I am in need of a new winter coat.  I have one and it’s still in OK condition considering I bought it nearly three years ago and it does get worn pretty much every day for about five months of the year.  It’s black, fairly basic and goes with pretty much everything I own but to be honest, it’s a wee bit on the dull side.  I’d like something to brighten up the dark winter and add a bit of fun to the standard workwear that largely consists of grey, white and black.

The problem is I’m a bit picky when it comes to my coats and the vast majority of them are black and grey.  I was losing a bit of hope when the red one I saw online was alarmingly orangey in real life (and orangey reds and I do not mix!) until I saw this…

It’s pink! It’s tailored! And it’s pretty!  And if that wasn’t enough, it’s also available in a brilliant purple colour (decisions, decisions…).  Just to add to the fabulousness it’s not horrendously expensive; £100 is not what I would call cheap but given that I have seen coats on the high street costing anything up to and above £300, £100 is not bad.  And whilst I have been going for looser coats over the past few years to cover up the flab, with my current weight loss and Operation Fit and Fabulous helping to lift my self-esteem above floor level, the fact that it has a nipped in waist to help show off my curves is brilliant.

The only problem is… pink or purple?  Come on folks, give me a hand, what’s your vote?

So I decided to add a bit of structure to my week by including some weekly posts which include Things I want Thursdays!  I have already touched on some of the things I’m currently coveting in the post I want, I want, I want… but the list is, to be honest, so long that I can easily write about this every week without running out of things to write about.  What can I say?  I’m a defeated shopaholic.  Defeated because due to exam retakes and time off sick I am currently poorer than a church mouse whose wife has run away taking all the cheese.  And anyone who can spot where that quote comes from will earn my eternal respect…

The question is though, not what do I write about but where do I start?!  Having been using Twitter actively for the past six months or so, I have discovered a number of smaller websites that I might never have looked at previously.  That’s not to say that everything that I want is from niche boutiques, oh no, some of the things I want are from giants of the retailing world and it is with one of these giants that I will begin…

If you uttered a word preceded by the letter ‘i’ ten years ago, people would have looked at you like you were mad.  But now, it’s relatively commonplace and it is all down to one gadget: the iPod.  Released in November 2001, I remember my brother ‘getting’ one for Christmas either that year or the next.  I put getting in quote marks as he didn’t get it for a while after Christmas as at that point it was the item you couldn’t find for love not money.  At the time the iPod was released, Mac computers were known as being reliable but little used outside of the advertising, media and design world.  Now, Apple computers are becoming more and more common despite their relatively high price tags.

I have an iPod; in fact, I have two.  One lives on the speakers in my bedroom and another in my handbag.  This doubling up is not due to sheer profligacy but because the one in my room sits on the speakers for a reason.  It’s nearly six years old and whilst it has put in good service, the battery is not what it was.  In fact, I’m lucky if it lasts for more than a couple of hours.  So when it comes to listening to music when I’m out of the house, it’s about as much use as a chocolate frog.  Hence the second iPod.

So I have an iPod, I have a fully functioning laptop which means there is no requirement for a MacBook or iMac (even though the iMac’s are incredibly desirable) and technically there is no need for what I am about to discuss here.  I definitely don’t need one but I want one.  I really, really want one.

What I’m talking about is, by manner of elimination, is of course an iPad.  An iPad 2 to be precise.  And before anyone asks why, there is no why.  They’re flat (less than a centimeter thick!) and you can effectively take a computer in a relatively normal sized handbag.  Also with the addition of the smart cover, you don’t even need to remember to turn it off.  Just flip the cover down over the screen and it turns itself off.  With the wireless off, the battery can last for up to ten hours so you could do pretty much a full day’s work.  I say with the wireless off as it tends to be the wireless (or 3G function if that is the option you have chosen) that eats battery life.

One of the main reasons I would love an iPad is because whilst I have blogged via my BlackBerry, the size of the keys mean that it is an arduous job and I tend to end up with cramp in my thumbs.  But the number of times I get inspired at work or when I’m out and end up making notes while I’m out, only to have lost the inspiration by the time I get home. 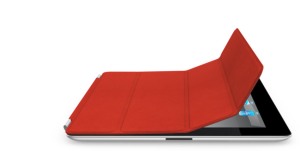 Don’t get me wrong, I’m not going to say I want the 64GB 3G plus wireless version which costs £659, although if anyone wants to buy one for me, I wouldn’t say no (a girl’s gotta try!), I’d be perfectly happy with the 16GB wireless only version, especially with the advent of the iCloud which means stores your content and makes it accessible from all devices.  Although I will confess I would go for the more expensive leather smart cover, even though the colours are slightly less inspiring (Apple, make a note, better leather smart cover colours!).  If for no other reason you can buy a red version from Apple which is part of the PRODUCT [RED] project where a portion of the proceeds go to help the fight against AIDS in Africa.

So how do you feel about the iPad?  Is this the ultimate accessory or will it be obsolete before you’ve even had time to set it up properly?

Afterward: since I wrote this I have heard that Steve Jobs, former CEO of Apple, died. He was a true visionary in a fast moving, highly innovative industry and has changed the face of music and computing forever. He transformed Apple from a niche manufacturer to one of the most widely recognised brands on the planet. And whilst his achievements have been immense, at this time my heart goes out to his family who have not lost a technological genius but a husband and father. RIP Steve Jobs