I do try not to hate anyone but there is someone who seems to be high fashion’s darling, who can do no wrong according to every magazine you pick up, who I really can’t stand. I thought this was just me but a few comments on Twitter have shown that I’m actually not in the minority here.

The conclusion? Fashion designers may love her but Alexa Chung, I’m sorry but I really don’t like you.

My first issue is what does she actually do?! I remember her presenting some, frankly rather rubbish, music programme on T4 about a million years ago but since then has she actually done anything? Other than turn up to the opening of an envelope? There are a lot of jokes about celebrities who are famous for being famous, but Alexa Chung is famous for what exactly?

The second is that I don’t really see why all the fashion designers and magazines laud her as being this incredible fashionista! I’m no style queen and I don’t claim to be but I know when someone looks good and I’m afraid Ms Chung doesn’t. She looks scruffy most of the time and does she actually even know what a hairbrush is?! And as for the “ombre” hair trend? Sorry kids but I was rocking that look when I was at university… It’s called “I can’t be bothered to get my roots done”. She’s just lucky that her dye job was relatively close to her own hair colour or it would have been less of a trend and more of a faux pas.

Would you go to a Hollywood party with your hair like this?

And as for the Mulberry ‘Alexa’ bag? Unfortunately, I love it. Other than the name. It’s a bit vintage but without going overboard. An updated classic satchel. I just don’t get why Mulberry named it after her. 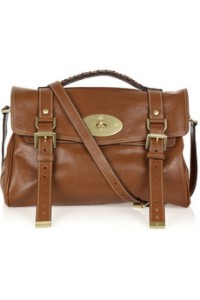 So to the magazines and the designers, I just want to say, she’s not all that. If you want a muse, choose someone who actually does something for a living and isn’t just a “celebrity”.

Do you agree with me or do you like Ms Chung?

5 thoughts on “Famous for the sake of being famous”

What do you think? Add your views! Cancel reply